Thank you for subscribing our newsletter! 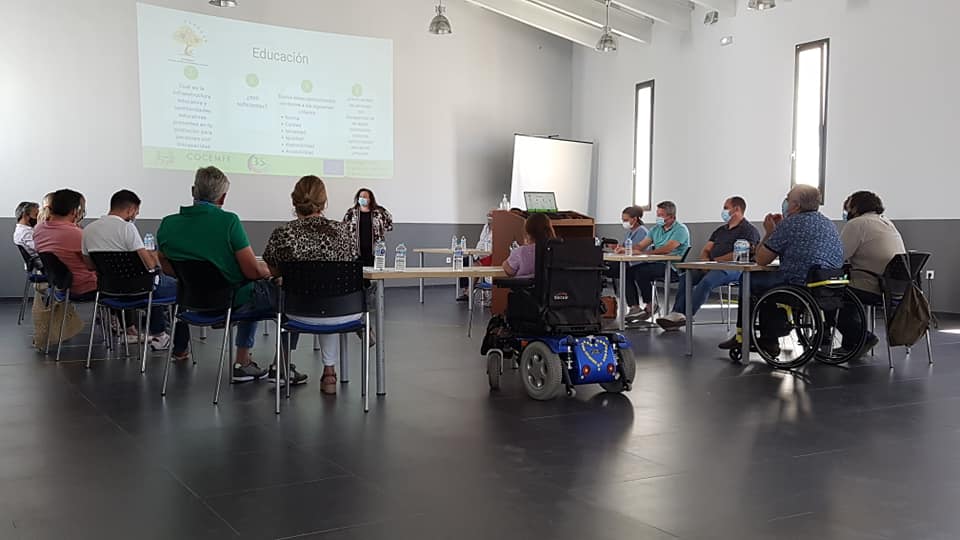 Eu-Rudisnet project is organising focus groups to detect the needs of people with disabilities in the rural area of said municipality, especially in terms of their civic and social participation in all countries where the project is implementing (Spain, Italy, Turkey, Germany, Slovenia and Lithuania)
These activities, developed under the EU-RUDISNET program (network for the social inclusion of people with disabilities in rural areas of the European Union through mentoring and leadership training), are co-financed by Erasmus+, and coordinated by the Provincial Federation of Associations of People with Physical and Organic Disabilities of Seville (COCEMFE Seville).
Due to this initiative, people with disabilities, administrative technical staff and leaders of associations of people with disabilities have been able to deepen the local needs and services that are offered in these rural regions to people with disabilities. Among the proposals collected, we must highlight the importance of undertaking training actions on disability, accessibility and independent living for public administration staff, who sometimes encounter barriers and problems due to this lack of retraining regarding to their occupation.
In addition, the need to improve the training offer and support for the labour integration of people with disabilities, especially the younger people, has been highlighted, establishing the necessary controls to ensure that this labour integration is effective and real. Likewise, the importance of offering mentoring training to the leaders of disability associations has been underlined so that they can accompany other people to create new initiatives of associationism and participation. Another of the conclusions, among others, has been the need for the personal assistant profile as a means to achieve independent life in rural areas, as well as achieving an inclusive and accessible leisure.
In Spain, these focus groups were celebrated in the headquarters of municipalities in the province of Seville and mayors and other representatives participated in. Some of these municipalities are: Bollullos de la Mitación, Coria del Río, Gines, Carrión de los Céspedes, Huévar del Aljarafe, Castilleja del Campo, among others.
In these groups adult educators and representatives of the local associative movement also participated. Some of them: the Andalusian Association for Inclusion (API), Association of patients with Tourette Syndrome and Associated Disorders (ASTTA) , Association for the Psychological Support of Mothers and Parents of Children with Disabilities (Magnolia), and the Association Cuando tú quieras (CTQ) in Gines, Representation of elderly people in Carrión de los Céspedes.
During the presentation of the focus groups, the president of COCEMFE Sevilla, Juan José Lara, stressed the line of action set by The EU to create alliances and that this is how disability organizations in rural areas can be heard with the support of the administrations.
Mayor of Bollullos de la Mitación declared: “If we do not give voice to the associations, we can hardly know what their needs are. All our commitment to people with disabilities has to increase by accompanying local associations that work hard and very well”.

This project has been funded with support from the European Commission. This website reflects the view only of the author and the Commission cannot be held responsible for any use which may be made of the information contained therein.

You can find out more about which cookies we are using or switch them off in settings.

Strictly Necessary Cookie should be enabled at all times so that we can save your preferences for cookie settings.

If you disable this cookie, we will not be able to save your preferences. This means that every time you visit this website you will need to enable or disable cookies again.

This website uses Google Analytics to collect anonymous information such as the number of visitors to the site, and the most popular pages.

Please enable Strictly Necessary Cookies first so that we can save your preferences!

Please enable Strictly Necessary Cookies first so that we can save your preferences!